Pope Pius XII consecrates the world to the Immaculate Heart of Mary on October 31, 1942

On October 31st 1942, in the midst of some of the darkest days and the terrible calamities engulfing the world during World War II, Pope Pius XII consecrated the world to the Immaculate Heart of Mary. It is thought that this consecration was carried out at the behest of Our Lord's petition to Blessed Alexandrina of Balazar (see here) for the world to be entrusted to the most pure Heart of His Blessed Mother. Major battle operations were taking place around this time (battle of "El Alamein" in Africa, battle of Stalingrad in Russia, and other important offensives were taking place in the Guadalcanal and Solomon Islands Campaign in the Pacific), and important victories were obtained for the Allies shortly after the consecration was carried out. In Stalingrad, the Axis forces were encircled by Soviet troops on November 19 1942, and final victory was achieved in January 1943 when German Sixth Army commander Field Marshal Friedrich Paulus surrendered. By the same year, Africa was already firmly in the control of the Allied forces. Winston Churchill noted in his monumental 5 volume published history of World War II that the hinges of fate turned in favor of the Allies by December 1942, shortly after the consecration carried out by Pope Pius XII. Sir Winston Churchill said: "Before Alamein we never had a victory. After Alamein we never had a defeat."

Our Lord had revealed to Sister Lucy of Fatima that he would grant a shortening of the war so thoroughly merited by the sinful world as a result of the consecration.


"His Holiness will obtain that these days of tribulation [World War II] will be shortened if he obeys My desires in making the act of consecration of the whole world to the Immaculate Heart of Mary with a special mention of Russia."

Even though the Consecration was clearly pleasing to Our Lord, and thus brought about an earlier conclusion to the horrors and butchery of World War II, it must be noted that it did not fulfill Heaven's request made at Fatima that Russia should uniquely and specifically be mentioned in an act of Consecration in union with the world's bishops, and this consecration would not effect merely a temporary cease in hostilities but a lasting world peace - the Pax Mariana. According to Sister Lucia writing at the beginning of 1943 (see here):


"God has already shown me His satisfaction with the act, although incomplete according to His wishes, performed by the Holy Father and several bishops. He promises in return to put a stop to the war soon. The Conversion of Russia is not for now."

The Consecration prayer (full text at the end) contains a special, oblique reference to Russia and the Orthodox Christian faithful:

"Give peace to the people separated by error and schism,
Particularly those, who have special devotion to You
And among whom there was no home, where Your venerable Icon was not honoured,
Though at present it may be hidden in the hope for better days.
Bring them back to the One Fold of Christ, under the One True Shepherd."


Hence, the consecration prayer alludes to the request made at Fatima (namely, to consecrate Russia, not the world, in union with the world's bishops), but falls short of Heaven's request. No doubt, this special mention of Russia brought about graces at a future date for the country. Nikita Kruschev in the '60s denounced Stalinism, in the '80s Gorbachev brought about Perestroika and Glasnost; finally in the past decade Putin has brought about a resurgence of Russian nationalism and a slow return to a path led by traditional Christian values. However, it must be noted that Russia has not converted to Catholicism - they are still separated by "error and schism", they are still not in the "One Fold of Christ, under the One True Shepherd". The miraculous conversion of the Orthodox to the unity of the Catholic Church will only take place when the consecration of Russia is finally complied by the pope according to Heaven's desires (see here).

In the first book I ever read on the Fatima apparitions (nearly 20 years ago) I distinctly remember the author mentioning the Holy Father's anguished voice in the radio address delivered to Portugal wherein the pope delivered the Consecration prayer in Portuguese as part of the 25th anniversary celebration of the Fatima apparitions. The photo below shows a very serious and stern looking Pius XII delivering the radio address on that day, the anguish for all the suffering victims of the atrocious conflict underway during that very moment clearly visible in his face (Msgr. Montini, the future Pope Paul VI, is on the far right of the photograph):

Here is the complete consecration prayer:

Queen of the Holy Rosary,
Help of the Christians,
Refuge of the human race,
Conqueress in God’s battlefields,

To You and to Your Immaculate Heart
In this tragic hour of human history
We entrust and consecrate ourselves,
And the Holy Church.
She is the Mystical Body of Your Jesus,
Suffering and bleeding in so many parts
And tormented in so many ways,
We consecrate to You the whole world torn by bitter strive
And consumed by the fire of hatred
The victim of its own wickedness.

Look with compassion to all material and moral destruction
To the suffering and fears of fathers and mothers
Of husbands and wives, of brother and sisters and innocent children.
Look at the many lives cut down in the flower of youth
So many bodies torn to pieces in brutal slaughter
So many souls tortured and troubled
And in danger of being lost eternally.

Oh, Mother of Mercy, obtain peace for us from God!
Obtain especially those graces, which can convert human hearts quickly.
Those graces, which can prepare, establish and insure peace.
Queen of Peace, pray for us;
Give the world at war the peace for which all are longing,
Peace in Truth, Justice and the Charity of Christ.
Give them peace of the arms and peace of mind,
That in tranquility and order
The Kingdom of God may expand.

Grant Your protection to infidels
And to those still walking in the shadow of death;
Give them peace and permit that the sun of truth may raise upon them;
And that together with us
They may repeat before the Only Saviour of the World:
"Glory to God in the highest
And peace on earth among men of good will" (Lk 2.14)

Give peace to the people separated by error and schism,
Particularly those, who have special devotion to You
And among whom there was no home,
Where Your venerable Icon was not honoured,
Though at present it may be hidden
In the hope for better days.
Bring them back to the One Fold of Christ,
Under the One True Shepherd.

Obtain peace and complete liberty for the Holy Church of God,
Check the spreading flood of neo-paganism,
Arouse within the faithful love of purity
The practice of Christian life and apostolic zeal,
So that the people who serve God,
May increase in merit and number.

All of humanity were once consecrated to the Heart of Your Son.
All our hopes rest in Him, Who is in all times
Sign and pledge of victory and salvation.
Forever we consecrate ourselves to You
And to Your Immaculate Heart,
Oh, Mother and Queen of the World!

May Your love and patronage hasten the victory of the Kingdom of God,
May all nations, at peace with each other and with God, proclaim You Blessed
And sing with You from one end of the earth to the other,
The eternal Magnificat of glory, love and gratitude
To the Heart of Jesus, in which alone,
They can find Truth, Life and Peace.

O MARY CONCEIVED WITHOUT SIN, PRAY FOR US WHO HAVE RECOURSE TO THEE!!

"Sweet Heart of Mary, be my salvation." (300 days indulgence)

The coat of arms has in the center a white dove holding an olive branch, the symbol of peace.

Pope Pius XII, pray for us! 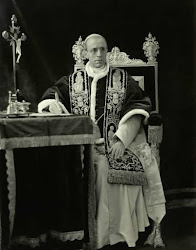 "And the work of justice shall be peace, and the service of justice quietness, and security for ever. And my people shall sit in the beauty of peace, and in the tabernacles of confidence, and in wealthy rest." (Isaiah 32:17-18) 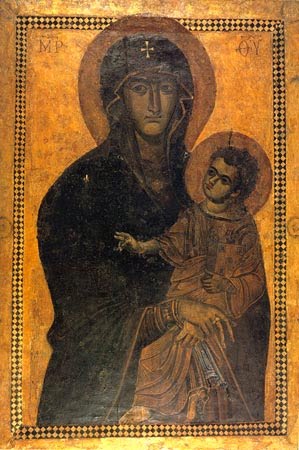 In the Borghese chapel of the Roman basilica Santa Maria Maggiore, Fr Pacelli celebrated his first mass in front of the holy icon April 1st, 1899 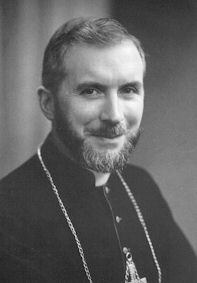 Episcopal Motto: "Credidimus Caritati" 1 John 4:16 (And we have believed in charity)
Archbishop Lefebvre was designated as apostolic delegate for French speaking Africa (1948-1959) by Pope Pius XII. The Vatican's Cardinal Tisserant visiting Lefebvre's diocese, said he was "amazed" by what he saw the Archbishop of Dakar do. But the best tribute came from the lips of Pope Pius XII: "Archbishop Lefebvre is certainly the most efficient and qualified of the Apostolic Delegates."

The Encyclicals of Pope Pius XII